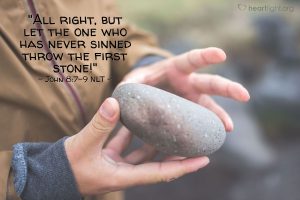 In this modern age, it’s hard for many to relate to the people depicted in ancient Scriptures. But all we have to do is read today’s newspapers or go to online social media to recognize the same old characters among us today. Take Pennsylvania State Representative Brian Sims, for example. He’s the spitting image of St. Paul. Actually, he’s more like the pre-sainted version, Saul, who persecuted the Christians of his day. Sims thought it was a good idea to verbally abuse a group of Christians voicing their pro-life beliefs in front of a Planned Parenthood site in Southeast Pennsylvania.

“Your Christian faith tells you you know what’s right for [other women’s] bodies,” he yelled at a rosary-carrying woman. “This is a racist act of judgment—an old white lady telling people what to do with their bodies!”

Meanwhile, his online mob texted cheers, with taunts like “Dragg her!”

Let’s fade from this verbal stoning to this Sunday’s first reading which puts us in the midst of an altercation that took place 2000 years ago. We hear a man named Stephen testifying to the re-emergence of the founder of Christianity—the one who was killed by another angry mob who felt threatened by his teaching (Acts 7:55-60).

Stephen said, “Behold, I see the heavens opened and the Son of Man standing at the right hand of God.” But they cried out in a loud voice, covered their ears, and rushed upon him together. They threw him out of the city, and began to stone him. … As they were stoning Stephen, he called out, “Lord Jesus, receive my spirit.” Then he fell to his knees and cried out in a loud voice, “Lord, do not hold this sin against them;” and when he said this, he fell asleep.

Fade back to the Pennsylvania pro-lifers. The woman whom Sims verbally stoned tells her fellow counsellors “I have forgiven him and am praying for him.”

Back to Scripture. Once Stephen is buried, Saul wastes no time continuing the work of his mobsters (ACTS 8:3):

Saul, meanwhile, was trying to destroy the church; entering house after house and dragging out men and women, he handed them over for imprisonment.

We know what happened to Saul on the road to Damascus. When Jesus appears and asks him “Saul, why are you persecuting me?,” the stage is set for his life-saving conversion into one of Christianity’s most powerful advocates. His second chance is his own second coming.

Sunday’s second reading tells us of another saint’s life-changing encounter with Christ, only this one is told more for our benefit with help from St. John’s revelation (Rev 22:12-14, 16-17, 20):

I, John, heard a voice saying to me: “Behold, I am coming soon. I bring with me the recompense I will give to each according to his deeds. I am the Alpha and the Omega, the first and the last, the beginning and the end.” … Let the one who thirsts come forward, and the one who wants it receive the gift of life-giving water.

The life we are given no human has the right to take. That is what every Christian standing in front of an abortion clinic believes. On this Sunday, as we recall Christ’s ascension from this human realm, we are all called to rise above our human limitations and channel the life-giving force flowing within us into the eternal reservoir that humanity was welcomed to share with its Creator. Jesus issues that invitation to us through his disciples, as Sunday’s gospel tells us (Jn 17:20-26):

Lifting up his eyes to heaven, Jesus prayed saying: “Holy Father, I pray not only for them, but also for those who will believe in me through their word, so that they may all be one, as you, Father, are in me and I in you, that they also may be in us, that the world may believe that you sent me. 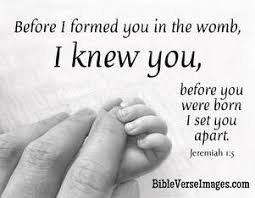 That union of lives includes the born and unborn, because, as the Prophet Jeremiah learned, our purpose is formed along with us, within our mothers (JEREMIAH 1:5):

Before I formed you in the womb I knew you, before you were born I dedicated you, a prophet to the nations I appointed you.

That’s an appointment for life.