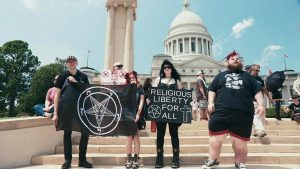 A recent documentary, “Hail Satan?,” follows a group called the Satanic Temple—which is recognized as a church by the IRS. A film review of it reprinted in The Plain Dealer opened this way:

The church members busied themselves with community service projects, such as clearing litter from highway shoulders and beaches, collecting socks for the homeless and gathering hygiene products for women in shelters.

Reviewer Terry Mikesell quotes the film’s director, Penny Lane, as saying this group does not worship Satan as a deity, or even believe in his existence, but they DO appreciate the spirit of a figure “willing to challenge the ultimate authority figure—God.” The film shows the group challenging state-sanctioned monuments bearing the Ten Commandments. But what do those commandments represent? Love of neighbor. More specifically, they say don’t rob, lie or kill and don’t destroy families through unfaithfulness. The Satanic Temple apparently likes doing unto others—they just don’t believe their drive toward such goodness could have been inspired by that authority figure they resent so much.

They’re much like the people described in the first reading for Pentecost Sunday (Acts 2:1-11). They hear Christ’s disciples speaking their language and are confused. They don’t realize something holy is happening to them—over and above the limits of their human capacity. God is speaking to them.

At this sound, they gathered in a large crowd, but they were confused because each one heard them speaking in his own language. They were astounded, and in amazement they asked, “Are not all these people who are speaking Galileans? Then how does each of us hear them in his native language? We are Parthians, Medes, and Elamites, inhabitants of Mesopotamia, Judea and Cappadocia, Pontus and Asia, Phrygia and Pamphylia, Egypt and the districts of Libya near Cyrene, as well as travelers from Rome, both Jews and converts to Judaism, Cretans and Arabs, yet we hear them speaking in our own tongues of the mighty acts of God.”

Maybe God was moving those homeless-helping members of the Satanic Temple to do the mighty acts of God, too. After all, they seem to believe the God they resent goes around wearing a name tag saying “Hello, My Name is … God.” Maybe they don’t realize God has many names but is one Spirit, as Paul tells the Corinthians in the second reading for Pentecost (1 Cor 12:3b-7, 12-13):

In the same edition but a different section the newspaper that carried that movie review was a Washington Post commentary titled “Should Public Schools be teaching scripture?”  It introduces us to Todd Steenbergen, a public school teacher in Kentucky who teaches a Bible class in which “the students hardly read the Bible at all.” Instead, he summarizes biblical stories for them and focuses on making moral connections to modern life. “Was there a time you helped provide some cheer for someone and it made you aware how good it was?,” he asks his students … “We can use wisdom and apply it in new ways today and help people be comforted.”

Wisdom is another name for the Holy Spirit of God, and one of Christ’s chief attributes, but if Steenbergen had made those connections for his students it would have given the ACLU the reason they’ve been waiting for to send up a warning flare to the Kentucky Dept. of Education. But in Sunday’s gospel reading (Jn 14:15-16, 23b-26), Jesus offers this defense for anyone using his words:

“The word you hear is not mine but that of the Father who sent me. … I have told you this while I am with you. The Advocate, the Holy Spirit whom the Father will send in my name, will teach you everything and remind you of all that I told you.”

Steenbergen and even those authority-hating but good-work-doing “Satanists” may not realize it, but the spirit moving them could just be God speaking their language.