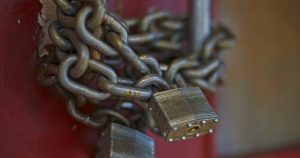 Less than a third of us go to church anymore.

That’s what a recent Wall Street Journal/NBC News poll reported. Only 29% of Americans responding to the pollsters say they attend religious services once a week or more often. It was 41% in 2000. Twenty-six percent of us NEVER go to church. Among people aged 18 to 34 that number is 36%.

So what? What is church, anyway?

Too often, we forget what we’ve known. It’s more than just a place to pray. It’s people. It’s a way of life—a coming together—a mutual caring. Social media have tried replacing Church in those roles. Instead, we have more isolation. More chronic individualism. More friction and division. We also have less opportunity to learn eternal gospel truths designed to shore up our susceptible moral health. Where else would those 18 to 34-year-olds get to know The Good Samaritan?

That person is the heart of the lesson Jesus used to answer the question a scholar of the law placed to him in this Sunday’s gospel reading (Lk 10:25-37).

“Teacher, what must I do to inherit eternal life?”

Jesus said to him, “What is written in the law? How do you read it?”

He said in reply,

“You shall love the Lord, your God … and your neighbor as yourself.”

Then this scholar reverts to self-justification—a self-serving technique worthy of today’s church-averse:

“And who is my neighbor?”

Then, like the best of teachers, Jesus asks his student what he learned from this story.

… Which of these three, in your opinion, was neighbor to the robbers’ victim?”

He answered, “The one who treated him with mercy.”

Jesus said to him, “Go and do likewise.”

Today, in our secular, online, self-justifying culture, go and do likewise is often taught as “Do unto others before they do unto you.”

Yes, church is a place, but it’s also a people who need to be reminded about their origin. That lesson dates back to before Christ and appears in Sunday’s first reading from Deuteronomy. Moses gives a similar answer to a similar question about our neighborly responsibility under the law. We’re not much different from the people to whom Moses addresses his lesson in Sunday’s first reading (Dt 30:10-14). We’re so busy looking into our intelligent devices for answers that we forget to look into the church of our soul, where the answer to the meaning of life resides:

It is not up in the sky, that you should say, ‘Who will go up in the sky to get it for us and tell us of it, that we may carry it out?’ … No, it is something very near to you, already in your mouths and in your hearts; you have only to carry it out.”

Moses and Jesus are both manifestations of God through the Holy Spirit. So are we. But many of us have renounced that spiritual connectivity. It’s hard to imagine such a Holy Spirit exists. But again, we often fail to look within ourselves. In Sunday’s second reading, Paul reminds us of our spiritual lineage (Col1:15-20):

Christ Jesus is the image of the invisible God, the firstborn of all creation. For in him were created all things in heaven and on earth, the visible and the invisible … For in him all the fullness was pleased to dwell, and through him to reconcile all things for him, making peace by the blood of his cross through him, whether those on earth or those in heaven.

Through him, with him, in him … in the unity of the Holy Spirit.

Where have we heard that before?

By walking away from their physical church, people are forgetting the meaning of this doxology that regulars hear every week. If those participating in that exodus would stop and think about it, they’d realize what the Spirit is saying: our inner Church is God’s dwelling place.

The key question is, will we continue to lock Him out?