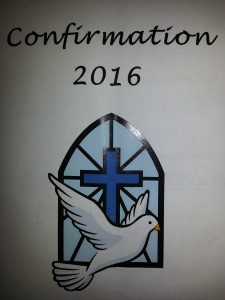 This edition of our mass blog is a prayer for Angela. She’s one of this year’s St. Michael confirmation candidates for whom Father Pete asked parishioners to devote some time in their daily conversations with God. Each of these students drafted a biographical profile and posted it on a bulletin board for people to select from for their prayer intentions. Our family picked Angela’s at random.

Her story also happens to offer an ideal focal point for studying the readings selected for this Sunday’s mass (May 8th). The saint Angela chose for her confirmation name is St. Peregrine. As Angela explains in her profile, he is the patron saint of those with cancer, a disease plaguing several of her close relatives. What she prays for most from the Holy Spirit, she writes, is the gift of fortitude. “I want to be able to stand up for what I believe when facing difficult situations.”

Who better to teach fortitude in the face of difficulty than someone who used prayer to battle his cancer? Peregrine’s prayer for a cure saved him to be a role model for many like Angela. What is particularly important about this is the source of Peregrine’s faith. It rose from the death of his hatred. Peregrine hated Christians in his younger days. Tradition has it that in 1260, as a politically active member of a wealthy family who despised Catholicism, Peregrine demonstrated his animosity by face-slapping Philip Benzi, a mediator the Pope sent to his city. It is written that when Philip offered his other cheek, Peregrine was overcome by remorse and repented.

This account of Philip’s fortitude in the face of Peregrine’s persecution sounds very much like this Sunday’s first reading (Acts 7:55-60) recounting the stoning of Stephen as instigated by another Christian-hater: Saul. Empowered by the Holy Spirit, Stephen offered a vision of the future that nobody within earshot—especially Saul—wanted to hear:

“Behold, I see the heavens opened and the Son of Man standing at the right hand of God.”

People on the receiving end of Stephen’s prophecy screamed and covered their ears, as if being exposed to a shrieking siren. They not only threw him out of town for disturbing their peace, but they stoned him to death—with the permission of someone whose voice they sought to drown out Stephen’s. As our gospel account reveals:

The witnesses laid down their cloaks at the feet of a young man named Saul.

Like Peregrine, Saul was a persecutor of Christians but later repented of his actions and became our Church’s premier defender and advocate. With his newly confirmed faith, he took on a confirmation name: Paul. Both Peregrine and Paul, like Philip and Stephen, have become role models for those seeking the courage to stand up for their beliefs.

That courage is anyone’s for the asking, and that’s just what Angela and her classmates are doing through their confirmation. These kids are joining legions of others, past, present and future, seeking a place in God’s Kingdom. As St. John proclaims in this Sunday’s reading from the Book of Revelation (Rev 22:12-14, 16-17, 20),

Let the one who thirsts come forward, and the one who wants it receive the gift of life-giving water.

As Peregrine and Paul proved, their unworthiness didn’t disqualify them from receiving the gift of the Spirit. We’re all unworthy of that. Yet all we need is the courage to stand up and ask for it in order to attain it.

Our prayer/blog for Angela concludes with a prayer within a prayer. This comes directly from the lips of Jesus as he prayed for the success of his disciples’ mission. Angela can take strength from this Sunday’s gospel reading (Jn 17:20-26), knowing that Jesus had her in mind when he said:

Holy Father, I pray not only for them, but also for those who will believe in me through their word, so that they may all be one, as you, Father, are in me and I in you, that they also may be in us, that the world may believe that you sent me.

Note: The above reading selections for Sunday, May 8th, may be replaced with those from the Solemnity of the Ascension.