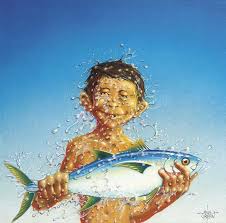 Guys like me who pontificate about matters of faith should pay special attention to this Sunday’s mass readings. Although many of us are guided by the Spirit, we can sometimes take a bit too much pride in occasionally saying something pithy about something important Jesus or the prophets once said. We are often slaves to our own ego. In our first reading (Is 8:23—9:3), the prophet Isaiah offers a key to the shackles confining anyone like me to the darkness of his own skull.

The people who walked in darkness have seen a great light; upon those who dwelt in the land of gloom a light has shone. You have brought them abundant joy and great rejoicing, as they rejoice before you as at the harvest, as people make merry when dividing spoils. For the yoke that burdened them, the pole on their shoulder, and the rod of their taskmaster you have smashed, as on the day of Midian.

Freedom from the slavery of selfishness is one of God’s greatest gifts. You may ask, if I’m worried about this blog becoming an ego-driven exercise, why bother with it? You are among the tens of readers who plow through it occasionally without benefiting from the insights of someone whose theology degree earned them that right to write it. No such degree here. Today the only bragging I can do is say that I am one of several Brothers in Christ who felt a calling to pay their blessings forward by investing their talents into some form of evangelism.

Bishop Richard Lennon of the Diocese of Cleveland wrote an article for the most recent issue of Northeast Ohio Catholic stating “We all are called to be evangelists.” In it he says discipleship is for everyone. “We just need to try, to start somewhere, to do something.”

Sunday’s gospel reading (MT 4:12-23) supports the bishop’s sentiments, recalling how and where Jesus selected his disciples: from among the ranks of fishermen.

As he was walking by the Sea of Galilee, he saw two brothers, Simon who is called Peter, and his brother Andrew, casting a net into the sea; they were fishermen. He said to them, “Come after me, and I will make you fishers of men.”

Socially lowly though they were, even these humble fishermen were known to have egos—especially the disciples who came later. Paul’s disciples had to be reined in a bit. We are privy to Paul’s gentle dressing down of his troops courtesy of Sunday’s second reading, from his first letter to the Corinthians (1 Cor 1:10-13, 17).

For it has been reported to me about you, my brothers and sisters, by Chloe’s people, that there are rivalries among you. I mean that each of you is saying, “I belong to Paul,” or “I belong to Apollos,” or “I belong to Cephas,” or “I belong to Christ.” Is Christ divided? Was Paul crucified for you? Or were you baptized in the name of Paul? For Christ did not send me to baptize but to preach the gospel, and not with the wisdom of human eloquence, so that the cross of Christ might not be emptied of its meaning.

The Brothers in Christ men’s group of St. Michael’s parish gives its members the opportunity to be disciples and evangelists. We also do a good job of keeping each other’s egos in check. The other brothers in our group offer the best of themselves in more important ways than I can offer via this blog. Examples include teaching PSR classes, coaching values-based team sports, helping nearly- and newly-wed couples understand the importance of their new family ministries, and even counseling bereaved families after the death of a loved one. I also know some readers of this blog who have done all of these things while adding church pew polishing to their list of weekend volunteer activities.

None of these ministries reaches millions of people at a time, but if millions adopted this one-at-a-time approach to evangelization, we could all make a real difference in the world. As dangerous as our egos can be, they also perform the spiritual duty of reminding us that change must begin with “me.”