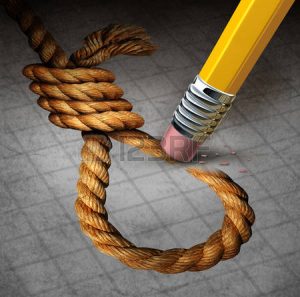 Two suicides made headlines in recent weeks. The word of God could be read between the lines of both stories.

Steve Stephens, Facebook devotee, followed up on a promise he posted to his page and shot a total stranger to death in some bizarre form of justice that made sense only to him. He later turned the gun on himself when he could no longer escape human justice.

Under religious justice, suicide is said to be the only unforgivable sin. Yet, anyone following these stories in the media could not escape the truth behind God’s system of justice as reflected in the inspired words and deeds that became central to them. Hernandez was found with the words of John 3:16 prominently displayed on the open page of a Bible near his body. This is the passage promising everlasting life to anyone believing in God. Whether that was the last desperate hope of a poor soul praying for God’s saving justice or the work of someone else taking the word of God in vain is debatable in Hernandez’ case, but there’s no doubt that the family of Steve Stephens’ victim, Robert Godwin, has taken God’s Word to heart—because they forgave their loved one’s dead killer.

It’s hard to think of greater sinners than those who murder others and then themselves, but this Sunday’s liturgy invites us to ponder the King of Sinners–King David. Murder was David’s greatest but hardly his only offense against the Word of God, yet the Bible also makes God’s love for David quite clear. From childhood through death, it is evident that David’s special relationship with the Divine lived beyond his death—both in his psalms which have been quoted by prophets and saints and in the bloodline of the Son of God himself. Jesus’ rock, Peter, uses the words of David to make that connection to his Master in Sunday’s first reading (Acts 2:14, 22-33):

For David says of him: I saw the Lord ever before me, with him at my right hand I shall not be disturbed. Therefore my heart has been glad and my tongue has exulted; my flesh, too, will dwell in hope, because you will not abandon my soul to the netherworld,

David must have taken comfort from his own inspired prayers. They survived him and have inspired other prophets, saints and sinners throughout the ages, helping them cope with human futility.

In our second reading (1 Pt 1:17-21), Peter addresses us directly in reminding us about God’s system of justice as administered by God’s Son to help us erase our fated futility:

Beloved, If you invoke as Father him who judges impartially according to each one’s works, conduct yourselves with reverence during the time of your sojourning, realizing that you were ransomed from your futile conduct, handed on by your ancestors,

Throughout all those generations of our futile conduct, God used King David’s words, and those of other prophets and disciples, to remind humanity of the justice to come. Nevertheless, our tiny hearts continued failing to recognize God’s eternal presence in His inspired words, so we let ourselves be fooled to death by our mortal senses.  Then came Jesus, whose words were life itself (John 6:63).  In Sunday’s gospel reading (Lk 24:13-35), Luke tells us how the risen Christ slapped his disciples in the face with yet another reminder of who he is and always was.

“Oh, how foolish you are! How slow of heart to believe all that the prophets spoke! Was it not necessary that the Christ should suffer these things and enter into his glory?” Then beginning with Moses and all the prophets, he interpreted to them what referred to him in all the Scriptures.

Even today, amidst news of humanity’s most deadly sin of suicide, God’s words of eternal life are readily available to help us escape Adam’s legacy. Whether taking them from a Bible verse displayed next to a murderer’s dead body or seeing them come alive in the hearts of a murder victim’s family, choosing to live those words erases our mortality.