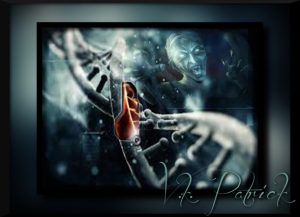 Any dream featuring Adolph Hitler would be classified as a nightmare, but what would you call a dream featuring Adolph Hitler wearing a pig mask, interrogating you for some vital information only you have? That nightmare terrorizes Jennifer Doudna, a microbiologist at the University of California at Berkeley.  In her waking hours she played a significant part in developing a way to edit human DNA, removing the bad parts that cause disease and possibly paving the way for disease-free humans. Judging by almost every science fiction movie from the 50s, the end result of her research could fuse the ideals of Superman with the evils of a Master Race.

The real terror of playing with DNA is the possibility of making an irreversible edit that gets passed on through generations, creating unforeseeable consequences for humanity—kind of like the sin mutation Adam passed down to his descendants. In this Sunday’s second reading, Paul explains to the Romans the heritability of original sin (Rom 5:12-15):

Brothers and sisters: Through one man sin entered the world, and through sin, death, and thus death came to all men, inasmuch as all sinned—for up to the time of the law, sin was in the world, though sin is not accounted when there is no law. But death reigned from Adam to Moses, even over those who did not sin.

Jealousy and greed are the most ancient and tenacious sins man edited into his original coding. Though Doudna and her partners linked pure intentions into their scientific efforts to edit our mortality, rivals have surfaced claiming authorship of similar theories behind the science of CRISPR, as this “innovation” is called. Even though both scientific sides claim pure intentions, commercialization among economic backers is already causing patent fights, lawsuits and the potential for price gouging. Those are the clear and present dangers of this research. I can imagine Jennifer Doudna adding another nightmare to her collection, similar to the one the prophet Jeremiah shares in Sunday’s first reading (Jer 20:10-13):

“I hear the whisperings of many: ‘Terror on every side! Denounce! let us denounce him!’ All those who were my friends are on the watch for any misstep of mine. ‘Perhaps he will be trapped; then we can prevail, and take our vengeance on him.’

The real victims in all of this talk about DNA splicing are the poor in genetic purity who have been marginalized on the human scale and used as poster children for the anti-ideal. Those who would edit the afflictions of those children are also denying God’s method of perfecting the imperfect for the benefit of those who are blind to their own blindness. What human hubris fails to see is that no soul is too humble to earn God’s attention—or too broken to be an instrument for restoring our sight. Sunday’s gospel reading from Matthew (Mt 10:26-33) has Jesus saying more in a few sentences about the worth of the least of our brothers and sisters than what all the scientific research papers say about humanity’s Superman fetish:

Are not two sparrows sold for a small coin? Yet not one of them falls to the ground without your Father’s knowledge. Even all the hairs of your head are counted. So do not be afraid; you are worth more than many sparrows.

If Doudna could find a cure for the greed threatening to cripple CRISPR’s good intentions, that would be the real scientific breakthrough. She might even get some much needed sleep.