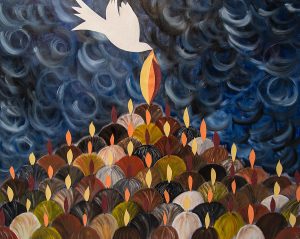 The 2000-year survival of Christianity is Christ’s greatest miracle—because it’s eternal, as he is. When you think how drastically culture and language change in the course of only a century, you realize how amazing it is that people are still devoting and risking their lives for what Jesus taught us beyond the limits of any language—even the one he spoke. The limitless miracle of Pentecost is linked to our limitations. Christ’s Holy Spirit overcame them in his disciples and in their tongue-tied target audiences just as Jesus incarnate conquered the limitations of his own flesh. Sunday’s first reading (Acts 2:1-11) dramatizes the awe of the multicultural crowd hearing Christ’s disciples speaking in their own languages.

At this sound, they gathered in a large crowd, but they were confused because each one heard them speaking in his own language. They were astounded, and in amazement they asked, “Are not all these people who are speaking Galileans? Then how does each of us hear them in his native language?

The first mighty post-resurrection act of the Holy Spirit wasn’t so much the gift of tongues, but giving humanity the ability to hear and understand the language of love. There is no greater love than to lay down one’s life for others, as Christ taught us by doing it. He also inspired his favorite disciple, John, to write that observation in a gospel that would be translated in many languages over many centuries. The singular act of suffering and dying as Jesus did is burned into the hearts of all who believe, no matter what language they speak. It freed us from humanity’s laws, even the laws of linguistics. Human laws are designed to protect human beings from human nature—driven as it is by worldly desires. The pursuit of those desires at any cost is why man needed laws in the first place—to protect us from each other. The pursuit of God’s law of love given freely liberates us from man’s law of self-preservation at all costs, as Paul told the Galatians in our second reading (Gal 5:16-25):

Those fruits are our birthright—stolen from us by our own greed for something more, but kept in a trust by Christ. Jesus gave us a second chance to get it back. He taught us that the Spirit of truth is all we’re entitled to, but that’s okay because it is everything, as John quotes Jesus in Sunday’s gospel reading (Jn 15:26-27; 16:12-15):

Truth is one language, and it’s God’s. It also happens to be the native tongue humanity forgot. All we have to do is reclaim it—then proclaim it.