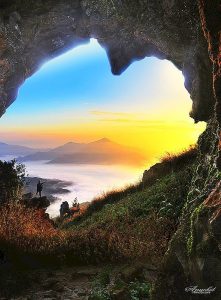 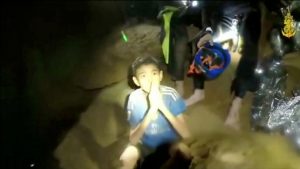 While those young Thai soccer players were trapped deep in an underground, underwater cave, it became apparent their only hope of salvation lay outside that environment. It came in the form of Navy SEALS who used all their skills to get to them. However, their ultimate salvation—getting out—would have to come from within each of those boys. They would have to remain calm, conserve energy, eat sparingly and absorb the basics of scuba diving—a challenge for anyone, but especially for non-swimmers like each of them! Their survival would depend on how well they prepared themselves and followed instructions.

In those ways, these boys were not much different from the Israelites trapped in the desert under Moses’ leadership. The major complaint of both sets of survivors was hunger. But as is the case with anyone who is starving, salvation isn’t found in just any food. It must be the RIGHT food—accompanied by the consumer’s ability to follow instructions. That’s a lesson straight out of this Sunday’s first scripture reading (Ex 16:2-4, 12-15):

Then the LORD said to Moses, “I will now rain down bread from heaven for you. Each day the people are to go out and gather their daily portion; thus will I test them, to see whether they follow my instructions or not.

The instructions were that for six days they should gather manna, but on the seventh day, they must observe the Sabbath. No gathering allowed. Still, on the seventh day some of the people went out to gather it, but they did not find any.

Then the LORD said to Moses: How long will you refuse to keep my commandments and my instructions? Take note! The LORD has given you the sabbath. That is why on the sixth day he gives you food for two days. Each of you stay where you are and let no one go out on the seventh day. After that the people rested on the seventh day.

Flash forward to those young Thai cave dwellers. Those boys hadn’t eaten for nine days when discovered, so rescuers feeding them all the solid food they craved could have caused their death. They would have to be satisfied with 21st century manna: energy gels. At least until they reached the salvation of home, they would have to conquer the cravings of their old selves. Paul offers similar instructions in Sunday’s second reading from his letter to the Ephesians (Eph 4:17, 20-24), and it applies to all of us who yearn to feed our ancient hunger for communion with our Father. Satisfying that appetite requires preparation too—escaping the “futility of our minds.”

“That is not how you learned Christ,” Paul states, “assuming that you have heard of him and were taught in him, as truth is in Jesus, that you should put away the old self of your former way of life, corrupted through deceitful desires.”

As the Israelites proved to themselves in the desert, and all of us who hunger for the wrong things in today’s cultural desert must learn, salvation is an acquired taste. It requires the preparation of learning, adjusting appetites and helping each other negotiate the long, dark, winding passage back to the inhabitants of a home we’ve prayed wouldn’t forget us.  As Christ told the scores of people he miraculously fed with a few loaves of bread (Sunday’s gospel, Jn 6:24-35), their bellies would again be as empty as their earthly appetites.

“You are looking for me not because you saw signs but because you ate the loaves and were filled,” he told them. “Do not work for food that perishes but for the food that endures for eternal life, which the Son of Man will give you.”

Those trapped boys learned to grow imperishable foods within their souls—like patience, endurance, tolerance and gratitude. And after learning that a Navy SEAL, Saman Gunan, gave his life in the effort to free them, many of the boys committed to being ordained as Buddhist novices in his honor

Judging by the distance these souls came along their spiritual journey underground, it sounds like they’re all taking the right steps toward the light at the end of their tunnel. Those of us raised in the light of Christ should let that light shine in their honor.