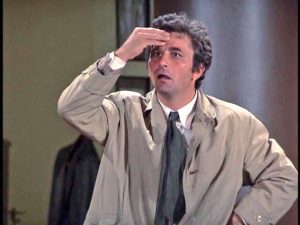 People love unlikely heroes. Our pop culture is full of them, from Bilbo Baggins (The Hobbit) to Lt. Columbo (the homicide detective). Their characters were so counter to our heroic archetype that their enemies tended to underestimate them. The Columbo formula was this: genius killer prepares elaborate alibi, murders his target, then waits for someone from Homicide to appear. The killer prepares for a battle of wits with the likes of Sherlock Holmes. Then this scruffy trench-coat-clad nebbish drives up in his beat-up 1959 Peugeot. When he appears on the killer’s doorstep searching his coat’s pockets for the notebook that reminds him to ask “one more thing,” the murderer’s guard falls. This leaves the perpetrator vulnerable to Columbo’s brilliant gift for sensing guilt.

The Bible is full of unlikely heroes too, from little David the shepherd boy to Jesus the carpenter. When it comes to sensing guilt, nobody was sharper than Jesus. He not only came on the scene sensing ours, but he took both friends and enemies by surprise by how he dealt with us. He forgave us! While doing so, he also took our guilt on his shoulders and paid our penalty. Even John the Baptist wasn’t sure this was the guy he was called to introduce as humanity’s hero  (Luke 7:18–23). John was expecting the fiery return of Elijah—someone who would enter public life with a roar. “He will baptize you with the Holy Spirit and fire,” John told people. But once Jesus was baptized, what fiery creature appears to herald our conquering hero’s entrance?

But why the surprise? Our humble savior’s mode of operation was anticipated by the prophet Isaiah in the Old Testament, as this Sunday’s first reading recalls (Is 42:1-4, 6-7):

Thus says the LORD: Here is my servant whom I uphold, my chosen one with whom I am pleased, upon whom I have put my spirit; he shall bring forth justice to the nations, not crying out, not shouting, not making his voice heard in the street. A bruised reed he shall not break, and a smoldering wick he shall not quench, until he establishes justice on the earth;

The second reading from ACTS tells us what John the Baptist and every other person in the vicinity saw Jesus doing (Acts 10:34-38):

He went about doing good and healing all those oppressed by the devil, for God was with him.”

“You are my beloved Son; with you I am well pleased.”

Columbo’s “one more thing” bit, where he catches his prey off-guard by returning to face the guilty one with a revelatory final question, is what made his character so pleasing to fans of the show.

Revelation accompanying our hero’s second coming. Where have we heard that one before?

For the uninitiated, here’s a brief introduction to Lt. Columbo: