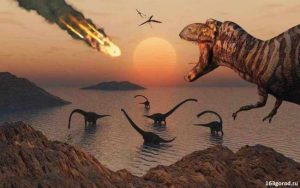 An episode on Public Television’s NOVA showed what the mass destruction of the dinosaurs must have looked like after a seven-mile-wide asteroid struck the earth 66 million years ago.  Scientists credit nature for this event. Thinking in such broad terms, global destruction is easy to imagine. What seems impossible for scientists to comprehend is the concept of individualized salvation.

The animation PBS presented can make the viewer feel very small in the grand scheme of earthly evolution over the millennia. One asteroid destroyed ALL the mighty dinosaurs on earth? What chance would we puny humans have?

On the other hand, watching this destruction via NOVA’s animation could also make you feel Godlike. This catastrophic event is shown from the perspective of an omniscient witness. The scientists who created the animation used geological evidence in writing the story of life’s destruction and recreation and let their audience dispassionately witness the end of the dinosaurs’ world as science interpreted it.

Christians believe in an omniscient narrator where the story of human life is concerned. We can’t conceive of a time when no one was around. One was ALWAYS around. We believe the Great I AM—a consciousness we call God—is the same one who threw that rock at our rock. We believe that asteroid was as much an instrument of his will as the prophets were. This Sunday’s first reading from Jeremiah (Jer 1:4-5, 17-19) tells us that God knew Jeremiah’s purpose before there even was a Jeremiah.

The word of the LORD came to me, saying: Before I formed you in the womb I knew you, before you were born I dedicated you, a prophet to the nations I appointed you.

So if Jeremiah was part of God’s plan long before the prophet’s birth, we have to think that must be the case for mankind in general—that each of us has a purpose that God mapped out long before mankind rose from the ashes and cinders created by the rock God threw at the dinosaurs. We are all part of the evolution of that plan. WE ARE is how I AM works in our world. WE ARE, for each other, evolving expressions of I AM’s eternal love. WE ARE heading toward unity with our omniscient narrator once our story is told, and WE WILL understand as well as the Author why we were created, as Paul tells the Corinthians in Sunday’s second reading (1 Cor 12:31—13:13 ).

When I was a child, I used to talk as a child, think as a child, reason as a child; when I became a man, I put aside childish things. At present we see indistinctly, as in a mirror, but then face to face. At present I know partially; then I shall know fully, as I am fully known. So faith, hope, love remain, these three; but the greatest of these is love.

I AM’s love is expressed in our existence, and our continued existence is a matter of his LOVE—not for ALL of us, but for EACH of us. We share the same spirit that Jesus sent as our representative before his Father, and that spirit of love is how we perceive God–face to face, one-to-one. In Luke’s gospel (Lk 4:21-30), Jesus explains the idea of such personal salvation:

There were many widows in Israel in the days of Elijah when the sky was closed for three and a half years and a severe famine spread over the entire land. It was to none of these that Elijah was sent, but only to a widow in Zarephath in the land of Sidon. Again, there were many lepers in Israel during the time of Elisha the prophet; yet not one of them was cleansed, but only Naaman the Syrian.

Salvation is a personal event between God and each of us. It gives us the hope to continue saying I AM what he made me to be.