Here’s a quiz. In which book of the bible will you find the following prayer?

Father I thank thee that in thy great mercy, thou hast taken pity on my great loneliness and now out of the silence of the night has brought two of thy lonely children together, and sent me a friend to be a light to mine eyes and a comfort in time of trouble. Amen. 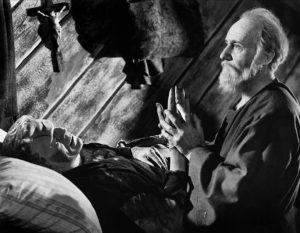 This was a trick question. It’s not from the Bible at all, but a line stolen directly from the classic monster movie, The Bride of Frankenstein. It comes from the beautiful and touching scene in which the film’s cursed, Godless, man-made creature finds comfort and shelter delivered by a Godly blind man who lives in the wilderness. This lonely hermit perceives the monster as God’s answer to his prayer for companionship, and, at least for a few minutes in this movie, the monster’s unspoken need for friendship is also fulfilled.

Over the years, since this movie’s release in 1935, it has been used by many people with a political axe to grind, from groups speaking out against man’s corruption of science to feminists criticizing masculinity’s desire to hijack a woman’s unique role in carrying and delivering human life into the world—if she so chooses, they add. Those warring factions tend to ignore this scene as the oasis of peace and salvation it represents to people of faith like me who are weary of humanity’s warring ways. So allow me to use this blog to hijack this scene back and apply it as an illustration for this Sunday’s mass theme: God’s forgiveness.

The first reading (Gn 18:20-32) is a continuation of last Sunday’s first reading where Abraham acts as the blind hermit does—by offering hospitality and shelter to strangers in need. In this case, the lead stranger is God himself. In this week’s scriptural installment, God is about to impose judgment on the residents of Sodom and Gomorrah for being not only inhospitable, but evil to strangers.

After reading that this Sunday, Mass attendees will recite this responsorial psalm Ps 138:6-7, about calling for help:

Lord, on the day I called for help, you answered me.
The LORD is exalted, yet the lowly he sees, and the proud he knows from afar. Though I walk amid distress, you preserve me; against the anger of my enemies you raise your hand.

Sounds like the kind of prayer the monster’s blind friend might have taught him, if given the chance.  In both of their cases, they were alienated from humanity and prisoners of their ill-serving flesh. But then, in Sunday’s second reading (Col 2:12-14), St. Paul tells us how Christ freed humanity from the imprisonment of their flesh.

And even when you were dead in transgressions and the uncircumcision of your flesh, he brought you to life along with him, having forgiven us all our transgressions;  obliterating the bond against us, with its legal claims, which was opposed to us, he also removed it from our midst, nailing it to the cross.

In my own hijacked version of the Frankenstein story, the man-made monster still has a God-created soul—because the man who made the monster was God-made, and therefore designed as God’s instrument to deliver God’s grace. Because of our fallen nature, however, this scientist’s sin was turning the public service he originally intended into self-service. What if immediately after the monster came to life the scientist had done what our hermit tried to do: deliver the grace this creature craved.

The horror of the Frankenstein series—and of our own real life—is that humanity isn’t only prone to bolting the door leading to God’s grace, but to destroying that portal all together. That non-fiction horror can be undone for the asking, as Jesus tells us in our gospel reading (Lk 11:1-13):

Knocking is a choice we must all make if we’re to escape the isolation imposed by our all-too-real man-made monstrosities.