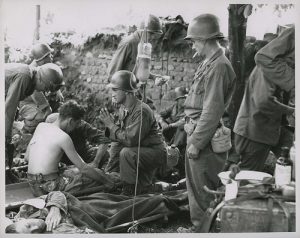 The phrase, “There are no atheists in foxholes,” is appropriate to remember on Memorial Day. It’s also fitting that this year’s holiday falls on the same weekend as the Solemnity of the Body and Blood of Christ. On Memorial Day we remember everyone who gave their lives in times of war for their fellow men and women. It may not be true that there are no atheists in wartime, but many veterans are Christ-like in a special way whether they are atheists, Jews, Muslims or agnostics. Wasn’t it Jesus who said, “No one has greater love than this: to lay down one’s life for one’s friends.”?.

Yes, Memorial Day is a secular holiday, but it shares roots of love with the Solemnity of the Body and Blood of Christ, as we see in the readings for this solemn occasion. The scriptures are filled with tales of wars against evil, including their rewards and consequences. Similar wars are taking place now, and many people are dying for their faith.

The Book of Genesis tells us how war became part of humanity’s existence when we fell from grace (I will put enmity between you and the woman, and between your offspring and hers; they will strike at your head, while you strike at their heel.)  But even times of war in the scriptures can be used to teach us about what it means to give from our storehouse of blessings.

In our first reading (Gn 14:18-20), Melchizedek blesses Abram using the symbols of bread and wine, a foreshadowing of what would later become the Eucharist—Christ’s body and blood, which Jesus sacrificed to save all of mankind who would accept his gift. In this passage we learn that God delivered Abram’s foes to him because he stood for a just cause in God’s eyes, as we can gather from Melchizedek’s blessing:

“Blessed be Abram by God Most High, the creator of heaven and earth; and blessed be God Most High, who delivered your foes into your hand.” Then Abram gave him a tenth of everything.

So when war becomes a necessary evil as we are confronted by the unnecessary evil of humanity, we must look for the love of God wherever we can find it. Like all the veterans we celebrate on Memorial Day, Abram gave back substantially from the blessings of God’s love which he had stored up. When we get to the gospels in the New Testament we see that Jesus commanded love and expected his men to give all they had in their battles against evil. Why else would he use among his teachings to them the image of the poor woman outside the treasury who donated her last two coins:

“Amen, I say to you, this poor widow put in more than all the other contributors to the treasury. For they have all contributed from their surplus wealth, but she, from her poverty, has contributed all she had, her whole livelihood.”

The basic training Christ gave to his disciples with regard to giving your all can be seen in Sunday’s gospel of the loaves and fishes (Lk 9:11b-17). They were surrounded by thousands of people hungry in body and soul. The disciples, having only five loaves and two fish to give everyone, are clueless how they’ll satisfy their master’s command to “Give them some food yourselves.” But under Jesus’ command, they gave all they had and more.

They all ate and were satisfied. And when the leftover fragments were picked up, they filled twelve wicker baskets.

The 12 disciples were taught to give all that was in them, and they did so until their earthly end. Jesus taught them this lesson at the last supper they shared together when he gave them the bread and wine that would become his body and blood. The lesson was passed on to St. Paul as he joined their ranks, and he shared what Christ said with the Corinthians as we hear in Sunday’s second reading (1 Cor 11:23-26):

“Do this in remembrance of me,” St. Paul quotes his master. For as often as you eat this bread and drink the cup, you proclaim the death of the Lord until he comes.

This lesson from the lives of Christ’s disciples makes every mass we attend a memorial day. Yes, war is ugly and often unholy, but when evil threatens the expression of faith—as it does in many parts of the world—those who give everything to sustain the lives of the faithful are Christ-like, whether or not they know it or believe it. Their kind of sacrifice is unconditional—and divine.