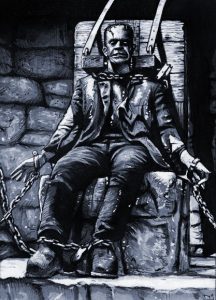 In time for Halloween, this Sunday’s gospel reading (Lk 18:9-14) gives us the story of a man-made monster—as told by Jesus. This is the tale of a creature driven mad by the shackles placed on him by his worldly life. His links to pride, vanity, contempt and self-deception are so tight that they disorient him into feeling these shackles make him better than his fellow creatures.

‘O God, I thank you that I am not like the rest of humanity — greedy, dishonest, adulterous — or even like this tax collector. I fast twice a week, and I pay tithes on my whole income.’

That tax collector to whom this poor creature refers is his polar opposite—freed by the grace of his creator from the same shackles tethering the Pharisee. Rather than swelling with pride (one of life’s shackles that is hardest to keep off our throat), he is filled with humility and the fear of being unworthy to even be on his creator’s mind.

This grim tale has a happy ending for the tax collector whose humility freed him and whose freedom haunts all who choose to remain shackled members of the living dead.

Our second reading (2 Tm 4:6-8, 16-18) is from a man whom the Holy Spirit resurrected from those ranks. Paul was a monstrous persecutor of those seeking freedom from eternal death—until he was reborn into new life in Christ. The freedom from the madness that caused him to victimize others made him eager to resurrect as many others from the living dead as he could. The more of those monsters who turned on him and tried to pull him back into their hell of Godlessness, the greater his hunger for the salvation his Master promised.

“From now on the crown of righteousness awaits me,” Paul tells Timothy, “which the Lord, the just judge, will award to me on that day, and not only to me, but to all who have longed for his appearance.”

Today we know the former Lost Saul as Saint Paul. What all saints have in common is their journey to find freedom from the “surly bonds of earth” while those of us still awaiting the Judge’s appearance bide our time in service to him. Let’s take comfort from our gradual successes in breaking life’s shackles and keep our faith in what our first reading from the Book of Sirach tells us (Sir 35:12-14, 16-18):

The one who serves God willingly is heard; his petition reaches the heavens. The prayer of the lowly pierces the clouds; it does not rest till it reaches its goal, nor will it withdraw till the Most High responds, judges justly and affirms the right.

May all souls who overcome life’s monstrosities bask in the eternal light of His affirmation.