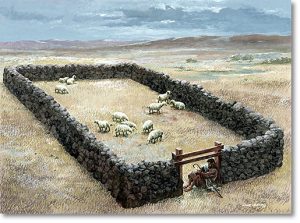 Imagine a place everyone wants to live, but it’s surrounded by a big beautiful wall. The wall is designed to protect the precious territory within, the mere thought of which gives searchers a warm feeling of freedom and well-being. The landlord of this place restricts access to one gateway where extreme vetting takes place. Many try to gain their own access to this transcendental experience by other means, sometimes on their own, but often led by self-proclaimed gurus who attract sheep-like followers to trapdoors disguised as gateways.

This may sound like current events, but it’s a story as old as scripture. In fact it’s the centerpiece of this Sunday’s liturgy.

“Amen, amen, I say to you, whoever does not enter a sheepfold through the gate but climbs over elsewhere is a thief and a robber. But whoever enters through the gate is the shepherd of the sheep. The gatekeeper opens it for him, and the sheep hear his voice.”

This quote from Jesus is from John’s gospel (Jn 10:1-10), and it is as pertinent today as when John first reported it. Even then people were trying to escape the slaveries of their world. Today we have many more false gateways to perceived happiness, including drugs, alcohol, pornography, even food. Many agents of these false gods try building gateways to them through the wall of the Kingdom Christ says is inside of us, but they always dead-end. Like these gurus, we’re all destined for vetting before entering God’s space behind the main gate, but until we do, as Peter suggests in Sunday’s first reading from Acts (Acts 2:14a, 36-41), we must do our own vetting of the forces hoping we’ll fall for their trapdoors:

“Repent and be baptized, every one of you, in the name of Jesus Christ for the forgiveness of your sins; and you will receive the gift of the Holy Spirit. For the promise is made to you and to your children and to all those far off, whomever the Lord our God will call. … Save yourselves from this corrupt generation.”

Who would have thought at the time Peter said this that a generation could last 2,000 years? We’re still like adolescents being misguided to gateways of the cool kids’ making. Their false promises of happiness linked to artificial ways and means leads to unproductive suffering. Is there such a thing as productive suffering? Yeah, it’s called living the authentic life into which we were born. St. Peter offers more good advice in Sunday’s second reading (1 Pt 2:20b-25):

If you are patient when you suffer for doing what is good, this is a grace before God. For to this you have been called, because Christ also suffered for you, leaving you an example that you should follow in his footsteps. He committed no sin, and no deceit was found in his mouth.

As Christ’s sheep we should innately recognize our shepherd’s voice. He beckons us from inside the main gateway in a language we were created to understand: the truth. Let’s bypass all those phony tunnels and ladders offered by this generation’s false prophets and follow our calling through the one true gateway to our happiness.