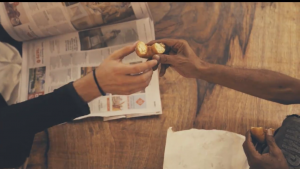 The “Hail Mary” prayer is said millions of times a day, once at a time and in decades of rosaries. It begins, “Hail Mary, full of grace…”  We say this so quickly and so often we tend to forget the significance of the word “grace.” In Catholic tradition it means the favor of God. But—especially where Mary is concerned—grace is also what’s shown to others through one’s bearing. It means “courteous goodwill.” As a verb, it also means to honor someone through your presence. Our lady defined grace in every sense of the term, giving as good as getting. She is a living example of the ideal our Creator expects from all of us. Grace is a theme that resonates in this Sunday’s mass readings. The first reading from Isaiah (Is 25:6-10a) has God shedding grace and hospitality on His children, but Isaiah also reports how gracefully those gifts are received:

On this mountain the LORD of hosts will provide for all peoples a feast of rich food and choice wines, … On that day it will be said: “Behold our God, to whom we looked to save us! This is the LORD for whom we looked; let us rejoice and be glad that he has saved us!”

Grace is an attitude. It’s being at peace, and sharing that peace, no matter what your situation. Through his letter to the Philippians (Phil 4:12-14, 19-20), Paul thanks his friends in Philippi for their generous financial support, but also shares with them the secret of being grateful and graceful even during times of physical deprivation:

Brothers and sisters: … I have learned the secret of being well fed and of going hungry, of living in abundance and of being in need. I can do all things in him who strengthens me. Still, it was kind of you to share in my distress. My God will fully supply whatever you need, in accord with his glorious riches in Christ Jesus.

Grace is also style. It’s the message you send to others by your appearance. It shows others you respect them enough to present yourself in the best way possible—by word, deed and dress. That isn’t a matter of financial prosperity, but of character. We know enough to bring this grace to job interviews, so why not when we’re fellow passengers on a plane, train or bus, or fellow diners at a café or restaurant? Now that everyone carries video cameras wherever they go, the social media carry miles of video footage showing the effects of humans empty of grace. This is nothing new. Through his parables, Jesus acted as the videographer for humanity’s earlier age. Sunday’s gospel from Matthew (Mt 22:1-14) offers a scene from a party that could have been held last week—and documented on Facebook and Twitter the very same night. It’s evident that in telling this story about us sinners, Jesus was hungry for the grace his mother was so generous with.

“The kingdom of heaven may be likened to a king who gave a wedding feast for his son. He dispatched his servants to summon the invited guests to the feast, but they refused to come. … Some ignored the invitation and went away, one to his farm, another to his business. The rest laid hold of his servants, mistreated them, and killed them. The king was enraged and sent his troops, destroyed those murderers, and burned their city. Then he said to his servants, ‘The feast is ready, but those who were invited were not worthy to come. Go out, therefore, into the main roads and invite to the feast whomever you find.’ … When the king came in to meet the guests, he saw a man there not dressed in a wedding garment.  The king said to him, ‘My friend, how is it that you came in here without a wedding garment?’ But he was reduced to silence. Then the king said to his attendants, ‘Bind his hands and feet, and cast him into the darkness outside, where there will be wailing and grinding of teeth.’ Many are invited, but few are chosen.”

We’re all on our way to that feast. Are we full of enough grace to make the journey worthwhile?

Here’s a fun little video proving grace isn’t always easy to gauge—in ourselves or in others. Stay with it for the surprise ending.

share with someone looking to donate to causes they love.

Why perspective is so important…..