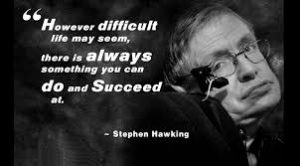 “While there’s life, there is hope.”

This Easter message comes courtesy of an atheist. Stephen Hawking, scientist and author of A Brief History of Time, passed to his eternal reward a few weeks ago. He never expected to wind up at God’s portal, but it is our hope and faith that he did—and that we all will. In life, Hawking was more conversant in portals called Black Holes, and he denied any connection between the “God particle” he once said would destroy the world and the God who once said He would save it.

Hawking even denied God’s presence in his own life, despite all the evidence for it that was right under his nose. Though his body was twisted into immobility by Lou Gehrig’s Disease, people who loved Hawking gave him mobility and helped him apply technology to return the voice he lost to the disease. These forces of love enabled him to free the brilliant mind with which God gifted him and focus it on the mysteries of life. The mystery that was lost on him was that his life was powered by a miraculous spirit that extended it decades longer than the lives of other ALS sufferers. People of faith would attribute such a powerful life force to the Holy Spirit.

Jesus said he is the way, the truth and the life. Hawking dedicated his life to studying all three of those forces. He never found them in God particles. They were deeply planted in the part of him God calls home—his very soul.  Sadly, he was as oblivious to God’s proximity to him as Jesus’ disciples were while walking away from the scene of what they thought was their Master’s demise. As one of Easter Sunday’s gospel readings tells us (Lk 24:13-35), they soon realized he was walking beside them on that road—in the form of a “stranger” to whom they told everything that had just happened.

“Oh, how foolish you are!,” said that “stranger.” “How slow of heart to believe all that the prophets spoke! Was it not necessary that the Christ should suffer these things and enter into his glory?” Then beginning with Moses and all the prophets, he interpreted to them what referred to him in all the Scriptures. … [T]hey urged him, “Stay with us, for it is nearly evening and the day is almost over.” So he went in to stay with them. And it happened that, while he was with them at table, he took bread, said the blessing, broke it, and gave it to them. With that their eyes were opened and they recognized him, but he vanished from their sight.

In Sunday’s first reading (Acts 10:34a, 37-43), Peter seems to echo Stephen Hawking’s unwittingly theistic philosophy of life-affirming hope in describing the mission to which their master guided them.

He commissioned us to preach to the people and testify that he is the one appointed by God as judge of the living and the dead. To him all the prophets bear witness, that everyone who believes in him will receive forgiveness of sins through his name.

Then in Easter Sunday’s second reading (Col 3:1-4), Paul—who at one time was as enthusiastically anti-Christian as Hawking—tells the Hawkings of this world where they should focus their inner telescopes:

“[S]eek what is above, where Christ is seated at the right hand of God. Think of what is above, not of what is on earth. For you have died, and your life is hidden with Christ in God. When Christ your life appears, then you too will appear with him in glory.”

Hawking’s saving grace might have been the blindness that made him incapable of seeing the evidence for “God with us.” Emmanuel has always been merciful to the ignorant, and now that the veil between Him and Hawking has been parted, let’s pray Hawking is finally enjoying the truth that was buried in his hopeful soul.