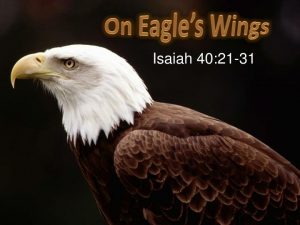 A well-dressed elderly couple rang our doorbell the other day. After sharing greetings, one question from them told me they were either insurance salespeople or Jehovah’s Witnesses.

“Are you worried about your future?,” one asked.

I told them I am Catholic, and not really worried about the future because of the faith that brought my family to this point in our lives. They smiled, suggested I look up Isaiah 46: 8-11, then departed. I immediately went to my Bible. Here’s what they were using Isaiah to tell me:

Remember this and be firm, take it to heart, you rebels; remember the former things, those long ago: I am God, there is no other; I am God, there is none like me. At the beginning I declare the outcome; from of old, things not yet done. I say that my plan shall stand, I accomplish my every desire. I summon from the east a bird of prey, from a distant land, one to carry out my plan. Yes, I have spoken, I will accomplish it; I have planned it, and I will do it.

This is what I should be worried about? A raptor attack? In this couple’s eyes was I no better than a Babylonian heathen worshipping false gods?

They didn’t suggest I read a couple chapters later, Isaiah 49, but I did—and you will too if you go to mass this Sunday (Is 49:1-6). It’s the first reading, and it foretells the coming of a servant of the Lord. This is the chapter I think many more Christians can and should relate to, because although our culture is still in a kind of Babylonian captivity, God is calling his people to free all remaining slaves from whatever is captivating them:

For now the LORD has spoken who formed me as his servant from the womb, that Jacob may be brought back to him and Israel gathered to him; and I am made glorious in the sight of the LORD, and my God is now my strength! It is too little, he says, for you to be my servant, to raise up the tribes of Jacob, and restore the survivors of Israel; I will make you a light to the nations, that my salvation may reach to the ends of the earth.

This chapter of Isaiah is ideal for remembering John the Baptist’s birthday, which we celebrate this Sunday. And though his birth seems a lot less scary than the future my front-porch visitors implied I should fear, the coming of this birthday certainly was a cause for fear among John’s future neighbors, as we are told in the gospel reading for this day (Lk 1:57-66, 80):

Then fear came upon all their neighbors, and all these matters were discussed throughout the hill country of Judea. All who heard these things took them to heart, saying, “What, then, will this child be?” For surely the hand of the Lord was with him. The child grew and became strong in spirit, and he was in the desert until the day of his manifestation to Israel.

John heralded his coming by proclaiming a baptism of repentance to all the people of Israel; and as John was completing his course, he would say, ‘What do you suppose that I am? I am not he. Behold, one is coming after me; I am not worthy to unfasten the sandals of his feet.’ “My brothers, sons of the family of Abraham, and those others among you who are God-fearing, to us this word of salvation has been sent.”

So there it is, the only thing God-fearing people have to worry about is fear itself. Salvation is our faith. And faith is our salvation. But John the Baptist did end up worrying about our future for us. While in prison awaiting his fate at the hands of King Herod, John heard what Jesus was doing—and it wasn’t what a conquering bird of prey would do. So he sent his disciples to ask Jesus: “Are you the one who is to come, or should we look for another?” Jesus sends John’s disciples back to him with a terse response (Matthew 11):

“Go and tell John what you hear and see: the blind regain their sight, the lame walk, lepers are cleansed, the deaf hear, the dead are raised, and the poor have the good news proclaimed to them.”

The good news is that though we’re not worthy of any of that, it is ours for the sharing.  John the Baptist’s birthday gift was passed down to us—we who aspire to be the least in the Kingdom of Heaven. That’s why we don’t have to worry about Isaiah’s curse as long as we live the promise God gave us through him: “I will make you a light to the nations, that my salvation may reach to the ends of the earth.”