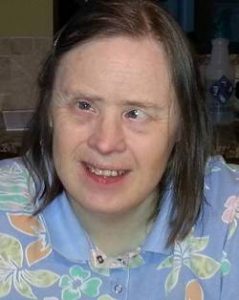 We did it Ma. We got her to the finish line. Thank you to everyone who helped along the way.”

That thank you note printed in the Mass Program for Rosie Day summarizes the success story of a friend whose funeral was more of a celebration than a cause to mourn. Her success was inherited by an extended family who gathered together and shared with each other how this woman touched their lives as much as they extended hers. She wasn’t supposed to survive 62 years. Long-gone doctors warned her parents not to expect Rosie to make it much past her teens.

That was indeed the case for most people with Down Syndrome when Rosie was born. Even as recently as the 80s life expectancies didn’t go much beyond 25. Neglect and abuse were unsung causes of death for such people. Loneliness isn’t supposed to be fatal, but as the first reading from this Sunday’s mass reminds us, our Creator deemed it downright unnatural for the human he designed (Gn 2:18-24):

The LORD God said: “It is not good for the man to be alone. I will make a suitable partner for him.”

The partnerships Rosie’s family created for her ensured not only a long life, but a rich one. To be sure, people with Rosie’s condition know suffering. Much of it is still caused by the prejudice and misunderstanding of others. But Rosie was raised in an atmosphere of faith, and even as she reached 60, she continued to participate in her church’s religion classes for adults with disabilities. In Jesus Christ, these people of faith have a role model who was familiar with their kind of suffering—especially their lower class status and their high mortality.  Here’s how Paul describes the nature of his Master’s temporary condition (courtesy of Sunday’s second reading, Heb 2:9-11):

He “for a little while” was made “lower than the angels,” that by the grace of God he might taste death for everyone. For it was fitting that he, for whom and through whom all things exist, in bringing many children to glory, should make the leader to their salvation perfect through suffering.

Jesus’ kinship with children is made clear through several scripture passages, but this Sunday’s passage from Mark’s gospel is a favorite among parents of children with “special needs” (Mk 10:2-16). It actually fulfills a special need parents like us have for reassurance that the lives we brought into the world have a special purpose: to lead other souls closer to God:

“Let the children come to me; do not prevent them, for the kingdom of God belongs to such as these.  Amen, I say to you, whoever does not accept the kingdom of God like a child will not enter it.” Then [Jesus] embraced them and blessed them, placing his hands on them.

That Godly embrace could be felt as Rosie’s family gathered for her memorial, and it is one that enfolds all souls who let themselves join the ranks of our Creator’s Special Children.