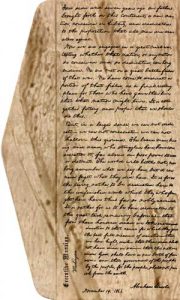 can fit on the back of an envelope. But what really set Lincoln’s speech apart from others is his defense of freedom being humanity’s birthright. Tell people who’ve been enslaved that they deserve a homeland, and they’ll listen to you all day. That’s what the people who had just returned to Israel, their homeland, did after their Babylonian captivity.  Nehemiah would help them rebuild what was torn down, and in Sunday’s first reading (Neh 8:2-4a, 5-6, 8-10), we witness how newly freed people were not only not bored by the daylong reading of the law that freed them, but they were emotionally transfixed by what Ezra the scribe was reading to them. 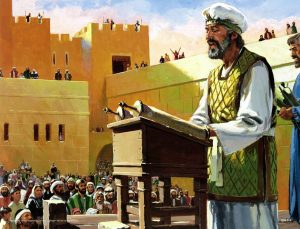 Standing at one end of the open place that was before the Water Gate, he read out of the book from daybreak till midday, in the presence of the men, the women, and those children old enough to understand; and all the people listened attentively to the book of the law. … Then Nehemiah, that is, His Excellency, and Ezra the priest-scribe and the Levites who were instructing the people said to all the people: “Today is holy to the LORD your God. Do not be sad, and do not weep”— for all the people were weeping as they heard the words of the law. He said further: “Go, eat rich foods and drink sweet drinks, and allot portions to those who had nothing prepared; for today is holy to our LORD. Do not be saddened this day, for rejoicing in the LORD must be your strength!”

In keeping with the theme of freedom from slavery, the gospel reading from Luke (Lk 1:1-4; 4:14-21) has Jesus coming to his home town of Nazareth and reading a short but sweet passage from Isaiah on the Sabbath, announcing freedom to captives:

He unrolled the scroll and found the passage where it was written: The Spirit of the Lord is upon me, because he has anointed me to bring glad tidings to the poor. He has sent me to proclaim liberty to captives and recovery of sight to the blind, to let the oppressed go free, and to proclaim a year acceptable to the Lord. Rolling up the scroll, he handed it back to the attendant and sat down, and the eyes of all in the synagogue looked intently at him. He said to them, “Today this Scripture passage is fulfilled in your hearing.”

The only problem is, his audience didn’t believe him. Jesus’s fellow Nazoreans knew him only as Joseph’s little son. They were blinded to the greatness to which they were all called—even the nobodies in their little nothing of a town. So if they felt none of the locals was worthy to house the spirit of their mighty God, then how could this carpenter’s son be the fulfillment of Isaiah’s promise?

Paul gives us the answer by saying that everyone can bring freedom and health if filled with the Holy Spirit—maybe not in the same way because the spirit manifests in abundant ways. In our second reading (1 Cor 12:12-30 ) Paul explains to the Corinthians how we become extensions of the fulfillment of Isaiah’s promise—but he does so exhaustively, using hundreds of words and offering many examples of how each of us is like a foot, an ear or an eye in having specific importance as part of one body, but are useless if separated from that body. Maybe that’s why the editors of the Catholic Lectionary responsible for selecting the passages for Mass readings decided to offer this severely edited version of Paul’s letter as an alternative (to save time and repetition?) (1 Cor 12:12-14, 27):

Brothers and sisters: As a body is one though it has many parts, and all the parts of the body, though many, are one body, so also Christ. For in one Spirit we were all baptized into one body, whether Jews or Greeks, slaves or free persons, and we were all given to drink of one Spirit. Now the body is not a single part, but many. You are Christ’s body, and individually parts of it.

Could the Lectionary editors be frustrated speech teachers? In this day of slavery to schedules, vices and tech devices, maybe we should take the time to read Paul’s unedited description of the Holy Spirit’s role in freeing us from our slave holders as intently and emotionally as those who were freed from Babylonian Captivity listened to Ezra’s all-day law seminar. It made them part of something again—different parts of the same eternal spirit of love.